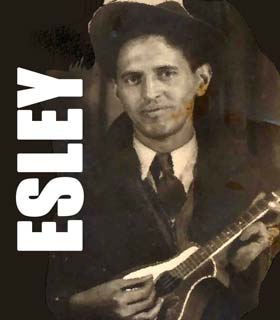 ESLEY: The Life and Music of Lesley Riddle

On July 31, 2009, a stage production about Riddle’s life, including his time with and influence on the Carter Family, had its world premiere at the Parkway Playhouse in Burnsville, NC, Riddle’s birthplace. “ESLEY: The Life and Music of Lesley Riddle” was written by Jeff Douglas Messer, directed by Michael Lilly and starred Jim Arrendell as Esley. In the summer of 2015, Parkway Playhouse revived the stage production of ESLEY with a new cast of actors, but still under the direction of Michael Lilly. Based on a true story, this play features Ash Devine as Mother Maybel Carter, Saro Lynch Thomason as Sara Carter , JJ Ponton as Esley and Ron and Minnie Powell as “the musicians.”

The play is about the life and music of African-American Lesley Riddle (Esley). In the late 1930s, Riddle met A.P. Carter in Kingsport, TN. Together they traveled the southern Appalachian Mountains collecting folk songs, Riddle preserving the melodies and Carter writing down the lyrics. They later worked at the Carter home in Mace’s Spring, VA, putting the melodies and lyrics back together again and adding new words and musical phrases to make the songs more pleasing to a contemporary audience. Through this association, Esley ‘s music influenced the legendary Appalachian folk music group “The Carter Family.” Though he was not given credit at the time (1930s-40s), Esley’s work helped to preserve hundreds of Appalachian folk songs and his style has influenced the 20th century evolution of country, blues and gospel music.

Messer mused in 2015, “It is interesting to have done the show originally in 2009, after the election of our first black President in America, since the story is very much about the success against the odds. Doing it 6 years later, and after a few weeks of major news about racial tensions in the South still being a major hurtle in this country, I can’t help but be proud that the show is an example of defying racial divides and looking beyond such petty things and finding a deeper understanding of humanity’s potential to rise above.” Messer is currently working on a screenplay and novel based on the stage script.